Peters Hill Fruit Orchard, a photo by Roberta Warshaw on Flickr.
Today feels like fall. For the first time this summer, I have to wait until it warms up a bit before I take my early morning bike ride.

This is a photo of Peter's Hill in the Arnold Arboretum. Right now the fruit is plump on the trees. Whenever I am there I feel like I am someplace else. It is hard to believe this lovely hilltop orchard is so close to the city. A mere 3.5 miles.

I am going to enjoy these last bike riding days to the fullest since I don't like riding in the cold. Then I will have to move my exercise indoors. But for now.......I will enjoy the glorious weather!
Posted by Roberta Warshaw at Tuesday, August 30, 2011 1 comment: Links to this post

leaves and shadow, a photo by Roberta Warshaw on Flickr.
I was feeling quite sorry for myself today,

What with Hurricane Irene spoiling my Labor Day week vacation in California. I woke up thinking I should be at the airport right now, blah, blah, blah.

And then I read this:
http://news.ninemsn.com.au/national/8291409/mother-dies-after-two-weeks-in-hospital
Julie Ann was the team leader for one of Etsy's street teams. it is called DUST, an acronym for Down Under Street Team.

The story is beyond heartbreaking. Apparently she was accompanying her ill daughter on a flight for medical treatment when the plane crashed, killing both her daughter and the pilot. Julie Ann hung on for two weeks and then died over the weekend, the day of her daughters funeral.

I know that sad things happen all the time but this was someone from the Etsy community. Even though I didn't know her I still feel very sad.

My thoughts and condolences go out to her family and loved ones as well as her team members.
There are various fund raising events happening over at her team web site to raise money for her family.

I have promised myself that I will stop feeling sorry for my lost trip immediately.
Posted by Roberta Warshaw at Monday, August 29, 2011 3 comments: Links to this post

Jump Rings Etc., a photo by Roberta Warshaw on Flickr.
I am revisiting one of my earlier designs now that I know a bit more about finishing my pieces.

When I first began these applique pieces, I had so much trouble getting the bottoms to fit, getting the edges to look finished and most of all figuring out how to connect the beads once they were done.

I gave up for a while but now that I have taken some tutorials, I feel more empowered with the new knowledge.

I used Ronna Sarvas Weltman's idea of coloring the inlaid stamps with shoe polish. It is a nice rich color but I do want to get some new acrylic paints as I would like to try that as well. I also want to try the Krylon 18K gold pens as Louise Fischer Cozzi suggests in her book and magazine articles.

I attached the bottoms with liquid clay and then as I learned in Helen Breil's tutorial added the border using my new extruder. The extruder makes lovely borders in case you were wondering. I just extrude the clay and then run it through the pasta machine for a nice, even, and flat trim.

Then came the jump rings. I have never liked jump rings as connections unless they are soldered. Even then, I never really liked the way they looked. But after seeing some jewelry designers use multiple jump rings, I thought I'd try that. I like it much better. I also feel better in that it makes the piece stronger. One un-soldered jump ring just doesn't work that well. But two, or maybe even three. Now that is a different story! I am also going to re-visit my use of coils as attachments. I like making my own findings as I think it really enhances the hand made aspect of the work.
Posted by Roberta Warshaw at Thursday, August 25, 2011 2 comments: Links to this post

New Jewelry Exhibit at the MFA 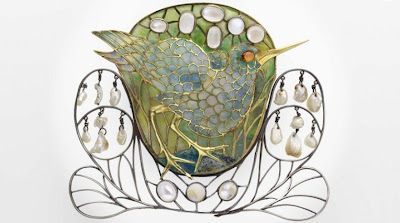 Today I escaped from my studio for a few hours and took a walk over to the Museum of Fine Arts to see the new jewelry exhibit that just opened. Needless to say it was a wonderful display of work. Small but wonderful. There were some incredible pieces there. The one you see above was one of my favorites. I love all the little connections on the pearls.

Whenever I look at jewelry exhibits I hone right in on the connections. I love seeing how stones and beads are connected. Are they cold connected or soldered? Are the jump rings soldered each and every time? Are the wires forged or left round? There was one necklace where the connectors were teeny, tiny coils of the thinnest gold wire. I am always amazed by the small sizes that some jewelers are able to solder and connect. I can barely see them!

I find that it is always good to get out of the studio and my own head and go see jewelry shows. I especially like seeing pieces that were made in another era. Imagine a time when using coral in your work wasn't illegal, nor was ivory. As jewelers, we really have had to adapt to changes in our materials over the past few decades. Gold has become untouchable, and silver keeps going up along with it. As I looked at all the jewelry, I was inspired by the fact that quite a few pieces almost looked like polymer.

So now I am very inspired by all I saw today and will try and get some new work done before we leave next week for San Francisco. We are going out to see my aunt for a few days which is always fun. She is my mom's sister and is always very entertaining!

If anyone has any suggestions for seeing interesting exhibits, do let me know!
Posted by Roberta Warshaw at Monday, August 22, 2011 1 comment: Links to this post

All Texture, All the Time

Texture maniac!, a photo by Roberta Warshaw on Flickr.
I am still happily playing with all my new textures. I keep making more of them. The field is endless, I must say. One could keep going forever.

A few weeks ago I took a very interesting class from Barb Fajardo on Craft.edu  It was called "Textured Tile Tesselations". It was really a great class, but I kept thinking how nice it would be if there were a handout to go along with the class.

Well, guess what? There is a handout and today I got it in my e-mail from Barb. I think that is the perfect compliment to an online class. When I read it over, I realized that there were already things I had forgotten from the class. The good news is that you can view the class up to 12 times over a year. I still have a few views left so I will most certainly take advantage of that.

I am hoping to take some more classes now that I see how easy it is and how well it works. Once school starts and I have more time to devote to my craft, that is.

If you haven't tried Craft.edu yet, and you are looking for some great tutorials, try it. I don't think you will be disappointed.
Posted by Roberta Warshaw at Friday, August 19, 2011 6 comments: Links to this post

Finished necklace, a photo by Roberta Warshaw on Flickr.
While digging around in my bead stash, I found these wonderful sterling silver beads I bought ages ago. I think they look really nice with the polymer clay and the metal clay.

I just listed it in my shop here. Who knows if anyone will ever find my stuff with the new crazy search changes that Etsy has been making lately. But I keep at it anyway. I am addicted to making things and can't stop.

I sent in my application today for the Artist Marketplace 2011 at the Brookline Art Center. So fingers crossed everyone!
Posted by Roberta Warshaw at Monday, August 15, 2011 7 comments: Links to this post

Pendant or pin?, a photo by Roberta Warshaw on Flickr.
It occurred to me today that I still have a ton of metal clay components sitting in boxes and bins in my studio. I had originally created them for use in bead embroidery but now that polymer clay has taken over my life, I decided to use them in this Helen Breil inspired piece.

She uses buttons in her work but since I had these, I decided to use them instead.
Posted by Roberta Warshaw at Wednesday, August 10, 2011 5 comments: Links to this post

Earrings, a photo by Roberta Warshaw on Flickr.
I am enjoying this texture very much and have been experimenting with a variety of colors. I like the summery feel that these have. They are quite a contrast from the ones done on black and I quite like them.

I recently found out about a show at our local arts center that I am thinking of applying to. It is a holiday show in December put on by the Brookline Arts Center. I am always nervous about applying to shows. I have never been very good at it since the sting of rejection can last for years. I have been rejected before, hence my reluctance to try again.

But I know that in order to grow as an artist it is something I really need to do more of. Especially now that I am no longer working at a regular job. I am in my studio every day, making things, learning things. Just doing it!

I especially need to branch out from Etsy. It is a good place to send people to so they can see your work but in order to sell things I need to get out in public. As I say, not always easy for me.

The first thing I need to do is make new business cards. My old cards show my old work so I will need new ones. Also, I think I may need a Tax ID. There are a lot of things to think about but the deadline is September 1st so if I am going to do it, I need to do it soon.
Posted by Roberta Warshaw at Sunday, August 07, 2011 5 comments: Links to this post

Robot Exhibit 2011 @ Norman Rockwell Museum, a photo by Roberta Warshaw on Flickr.
Heading down to the cape for the day to see friends. I thought I'd just share a quick picture of a cute robot sculpture from an exhibit on the lawn of the Rockwell Museum this summer.

I think he is quite divine!
Posted by Roberta Warshaw at Thursday, August 04, 2011 1 comment: Links to this post