It is hard to believe that once again, this weekend marks the end of summer. In these parts summer is just too short. I will miss my early swims, my long leisurely days with my grandson away at camp, as well as not having to cook too much. Not that I mind cooking but sometimes it is nice just to toss something on the grill, make a salad and call it dinner......My neighbors must wonder about me since I am  always out on my balcony at dinnertime smoking up the hood! Lucky for us we live in a concrete building and are allowed to grill. Many buildings here do not allow grilling on balconies.

As far as the art goes, I am still in the throes of making and using acrylic skins. I love the way the gloss medium allows you to see through them to the layers beneath. It is fascinating to me.

I have been experimenting with painting on Dura Lar but I really don't have the hang of it yet. If you want to see someone who does have the hang of it check out the work of Mary Zeran. I first "met" her in one of my online classes and have been following her work ever since. She paints on huge sheets of the stuff! I like the way the color is so pure on the Dura Lar. Nothing at all to influence the color. I like to keep trying new mediums and substrates. Keeps me on my toes!

This painting ended up on Flick Explore yesterday. So far it has garnered over 14,000 views. It is quite extraordinary really. I have no idea how these images are found and chosen. Is there really a person on the other end who decides? It seems hard to believe given the huge numbers of images uploaded to Flickr every day. If anyone has any idea of how it works, I am curious to know. It is not the first time one of my pieces has been chosen but this is the most views I have ever received. It made me quite happy since most of the time I am working in a vacuum.
Posted by Roberta Warshaw at Wednesday, August 20, 2014 6 comments:

I didn't get too much done this week due to circumstances beyond my control. But yesterday I did manage to finish up a few pieces that I had begun two weeks ago. I have discovered that I like covering the skins with a layer of high solid gel gloss. It smooths out some of the bumpiness of the acrylic skins and gives it another layer of depth.

This one is for sale here.
Posted by Roberta Warshaw at Monday, August 18, 2014 2 comments:

I cannot believe it is August already. And I am finding it harder to believe that there is only one week of camp left. I have been enjoying my free wheeling/ free painting summer days so much and I will miss them when they come to an end with the start of school.

I am still making acrylic skins rather obsessively! They are highly addictive. I really like these striped ones in the above painting. I made them by using clear gloss medium with black fluid acrylic paint for the lines. They are very organic looking to me!

I have been working on my online store site here where you can find my newest pieces of art for sale. I am trying to get away from Etsy since I hate giving them a cut of my profits. You can also find it by clicking the link at the top of this post that says Online Store.

Going to the movies tomorrow afternoon since it is my husbands last summer Friday. Going to see the new Woody Allen movie with Colin Firth.....be still my heart!
Posted by Roberta Warshaw at Thursday, August 07, 2014 3 comments:


I have been experimenting lately with making acrylic skins. In my Mucho Metallics class by Julie Prichard she shows an interesting way to make them by making them small rather than large and unwieldy.  I really don't like cutting the skins up. They are hard to cut and I don't like the cut edge so much. I make them in the shape I want them to be and then there is no cutting at all. You just need to be sure the paint is thick but not too thick. I also don't want them standing up too high on the piece. You can see some samples of what I am talking about below: 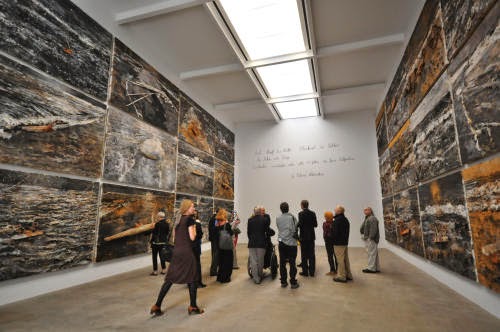 It has been a long time since I was so affected and inspired by another artists work. As a result I was a bit unprepared for my reaction to this show of Anselm Kiefer at Mass MOCA.

I had never actually been in the presence of his work. I had up until now only seen photos in books. And frankly, photos just don’t do this artist  justice. The work has to be seen to be experienced. The color. The texture. The size. The meaning. Everything.

All of it took my breath away. I kept wishing that there had been a place to sit and just contemplate the works because I could have sat there all day.

One part of the show consists of 30 paintings. 30 very large paintings. 15 on one wall and 15 on the other. The paintings are housed inside of a large corrugated room, kind of like a shipping container only bright and light. You can get an idea of the exhibit by following this link:

The first thing I noticed of course, was his palette. I love a neutral palette. He uses neutrals in a most exciting way. Greys, blacks, whites and some yellows and reds give meaning and energy to the work.  The paintings have so much light even though they are so dark. And they have so much motion and vibrancy. And the texture was just astounding.  I have read that he leaves his paintings outside in the open air and weather in order to further texturize and age them. Can you imagine leaving your work outside in the elements for over a year? That really takes a lot of nerve and respect for what can happen!

This series of paintings is inspired by the work of the futurist Russian poet Velimir Chlebnikov and deals with war at sea and the poets own mathematical theory that climatic sea battles occur every 317 years.  But there is much more than war going on in these paintings.

There are many embedded objects and  there are ships the artist built attached to the surface of the paintings. He even uses actual dead sunflowers in some of the pieces. There is also lots of writing although the words are in German and so I couldn’t read them which made them even more intriguing as a design element rather than copy.

I am now studying everything I can get my hands on by and about this painter. He also makes books, which I am only beginning to find photos of on the Internet and elsewhere.

If you live anywhere near Mass MOCA, go see this show. For me it was a life changing experience.
Posted by Roberta Warshaw at Friday, August 01, 2014 3 comments: