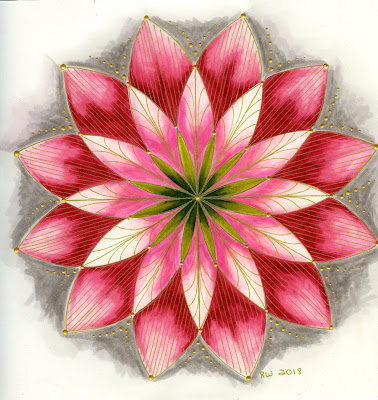 We are settling into our new home. Getting used to the high temperatures and going out in the morning and evening. Doing a lot of resting and relaxing.

And I have been working in my studio again finally. Although I am not picking up where I left off from actual painting all those months ago when I packed away my paints. I seem to be gravitating towards watercolors again. Not sure how that happened! But I have learned to go where it takes me and not to question things. I tried to get the acrylics out a few days ago but they seemed thick and gooey and I didn't enjoy them. I rather enjoy watching the paint flow with water. The only thing about watercolors is that the paper gets very wrinkly. You really need to stretch the paper. It is a tedious task to say the least.

I used to stretch many papers at a time in the bathtub. Let's just say it is a process and one I don't enjoy. I am going to try and gesso the paper first and see if that gives the same results as the stretching process. I am not sure if that will work or not. Otherwise I suppose I could use the acrylics as a water medium with some matte medium instead of water. Then the paper won't buckle.

In the meantime, enjoy your Fourth of July everyone!


We have been busy hanging all our artwork on the walls in our new home. It is now beginning to really feel like home to us both. It was hard to take all our art down for the sale of our condo back east. I really missed it so much. But now it is all hanging in it's new location and we can once again enjoy it. The top painting was done in Key West many years ago by one of my favorite artists (now deceased) Jack Baron. I have one other painting by him hanging in the kitchen. He was an original to say the least. He painted many things besides canvas. In fact he painted shoes, dolls, high chairs. Anything and everything. And so colorfully!

The two Mexican paintings were done by me in the late 1980's. I still love them. I wish I could paint that way again but it is hard to go back to a style from so long ago. Some artists may be able to do that but sadly, I cannot. Once I have painted through an idea and moved on, well then it is time to move forward.

Speaking of painting, being away from my art for the past couple of weeks has been difficult. I am used to a daily practice. Yesterday was the first day I created any art and it almost feels like I forgot how to paint. It will take me a while to get back into the swing of my practice.

At least now I finally have a studio again. That really feels wonderful. I have so much room I can even have my yoga mat on the floor so that if I need a stretch I can just get down on the floor and do that. I have been getting up really early every day to ride my bike as well. I get out there at about 6:30. Almost too late really!

We have arrived. I am pinching myself every few minutes. I still cannot believe we really made it. The past week everything went according to schedule. Which was great.

The flight out on Saturday was a little grueling as it usually is. First there were delays on both planes. Luckily we allowed enough layover time between flights. We have learned how important that is. I would much rather sit around the airport for a few extra hours than miss my connecting flight. It is not easy to fix. Usually when that happens you are not the only person who needs to re-book and most times there are no available flights. So always best to allow plenty of time between.

Plus our carry-ons were extremely heavy. Usually when we come out here we travel light since we have plenty of clothes already here. But this time we each had 2 laptop computers, I had all my good jewelry with me, we needed clothes for the two days at the hotel. Plus we had things that we forgot to ship or that we couldn't ship because we needed them until the bitter end.

I am very sore today from all that shlepping.

However, sitting in first class was quite amazing. I had so much leg room I couldn't reach the seat in front of me! Too bad we can't fly like that all the time. And the food. OMG. It did make the flight and shlepping and delays much more bearable.

Today the car arrived. That was really fast. Wednesday our UPS load of 34 boxes arrive. It is funny, I don't even know what is in them. We have everything we need here already. But you have to have your stuff right? At least according to the comedian George Carlin. I think that was one of the hardest things at the end of our stay in Boston. All our stuff was either here or in boxes. I missed it very much. Even though it is just stuff. You need it in order to feel human. I am no minimalist.

The picture you see above was taken from the plane as we were landing in Tucson. We arrived just in time for the first of the Monsoons and these clouds are what the monsoons look like from up above. Really spectacular!

Last night we opened all the windows and had all the ceiling fans going. We were so comfy. Today is much cooler than it has been here but as the week goes on we will need to turn on the AC since it will get back into the 100's by the end of the week. Time to go up to Mount Lemmon for the day!

I took a bike ride this morning at 6AM and it was delightful. I am going to try and get up early so I can get outside and exercise before the extreme heat sets in for the day. I hope I can do it. My sleep schedule has been so crazy lately due to all the stress and waking up at 3AM every morning.

The lizards are dancing everywhere you look and the birds are tweeting furiously!
Posted by Roberta Warshaw at Sunday, June 17, 2018 8 comments:


Everything is done now. The closing is over and the condo here in Boston now belongs to someone else. We are staying at a local hotel in the neighborhood. It does feel strange, to say the least, living in a hotel 2 blocks from our old condo.

I have shed many tears this week over leaving. The closer we got the worse my anxiety became. Even though I have wanted this for so long. I went through every possible emotion. We moved my grandson over to his mothers on Monday since he wanted to stay here in the Boston area and keep working at Trader Joe's.  After he moved I had to keep the door to his room closed because I was so sad that he was no longer living in there. Even though I always complained about the dirty clothes all over the room and food plates left willy nilly. I will still miss him terribly. I love him dearly.

But we had a lovely meet up with him this morning.  I texted him that we wanted to see him to say goodbye. He was very near the hotel getting a burrito so he came here and he ate it in the hotel bistro. We had a real conversation for the first time. Ever. I can feel our relationship changing to something so much better than me yelling at him to get up for school. I feel like I can leave now and he will be fine. He has a good head on his shoulders and is a hard worker.

Tomorrow we fly away home to Tucson. See you there!
Posted by Roberta Warshaw at Friday, June 15, 2018 5 comments: 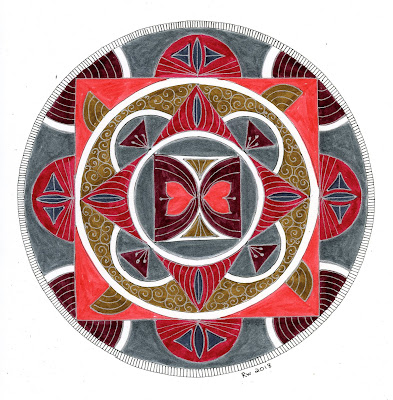 Well, I have some good news to share. My grandson will, in fact, be graduating with his class this coming Sunday. I am beyond happy. I had to run out, buy a cake and invite family for a small party. He pulled it off in the eleventh hour. Literally. Final grades were due at 3PM on Wednesday and at 2:50 he was handing in his last due assignment. Talk about skin of his teeth. He is a last minute person but this was ridiculous.

The past weeks I have been so sad and depressed. Not to mention that I could not bear to look at Facebook or any posts from proud parents and grandparents and their graduates. It was too painful.

I may post a photo or I may not. He has never liked it when I post his photo on my social media pages so I don't want to disturb the peace so to speak.